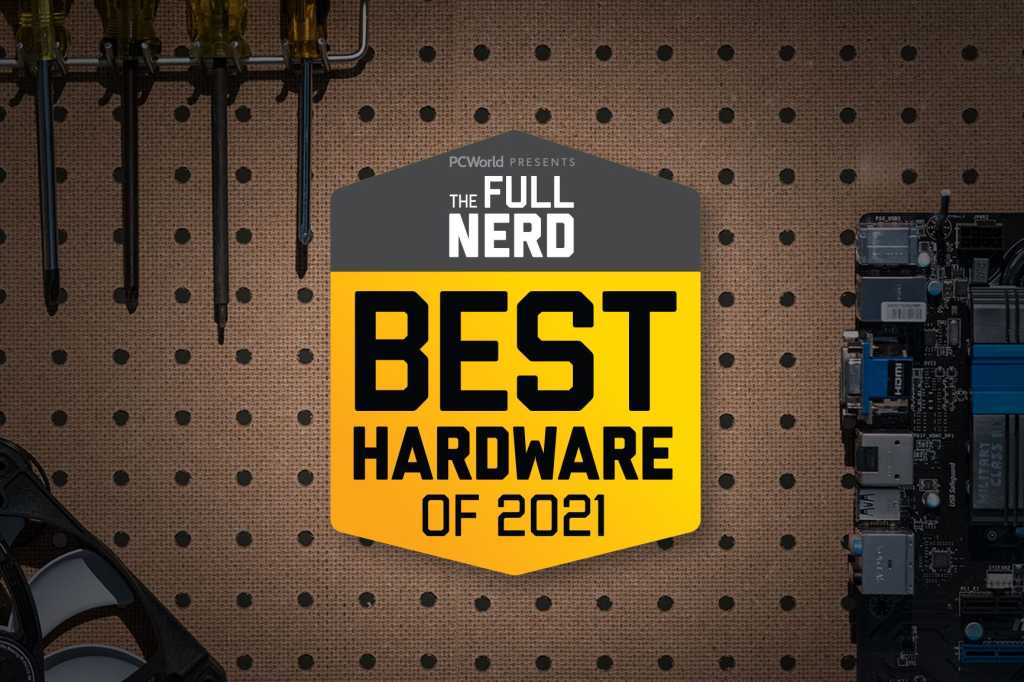 Despite the chaos of the pandemic, 2020 worked out to be an excellent year for new PC hardware. But that momentum sadly did not carry into 2021, as chip shortages and supply chain issues made it hard to obtain the latest and greatest, much less at list prices. As a result, selecting nominees for the annual The Full Nerd awards was rough going—though there were still plenty of PC hardware contenders vying to win our enthusiast hearts over.

In this episode, Gordon Ung, Brad Chacos, Alaina Yee, Keith May, and Adam Patrick Murray split down decisive lines on what moved the needle for the PC. Performance? Value? Raw availability? Everyone could only agree on one point: The lack of hardware availability is a big bummer. The eight winners our team picked for 2021 all rocked our socks for one reason or another, however. Keep reading for a summary of the results, along with our key arguments. For the full conversation, including the nominees selected for each category, check out the video embedded below.

You can also watch The Full Nerd episode 197 on YouTube (subscribe to the channel while you’re there!) or listen to it on Megaphone.fm if you prefer the audio alone.

This episode of The Full Nerd is brought to you by Avast’s new all-in-one solution, Avast One, which helps keep your identity and actions hidden, stops malware, phishing, and virus attacks, and helps clean up your devices. And because Avast believes essential protection should be available to everyone, a free version of Avast One still includes award-winning free AV, free VPN, free firewall, and much more.

At long last, Intel finally left 14nm transistors behind with its November launch of Alder Lake, and what a leap in performance that made. Built on the Intel 7 process (formerly known as 10nm), these 12th-generation processors absolutely smoke 11th-gen “Rocket Lake” chips—which came out just a little over six months ago. The difference is so stark that prices on Rocket Lake chips have already plummeted. (Farewell, Rocket Lake, we barely knew you.)

Alder Lake also lands a solid blow to AMD’s Ryzen 5000 CPUs. Our winning CPU, the mid-tier Core i5-12600K, posts head-turning gains in multicore performance over the 5600X—as much as 36 percent. The doubts we had earlier about Alder Lake’s hybrid design and its mix of performance and efficiency cores have completely vanished.

But Alder Lake doesn’t completely dominate in one key area—gaming—which opened up the floor for much debate. In the end, though, the majority pulled together to hand a win to Intel’s latest achievement.

Yes, you’ve read that correctly—integrated graphics win the top spot for best GPU. The last time this happened, the RTX 20-series had failed to impress enthusiasts. When given the tie-breaking vote back then, The Full Nerd fans chose the Ryzen 3 2200G over the GeForce RTX 2080 Ti. (Resident GPU expert Brad still hasn’t forgiven Alaina for that outcome.)

The discrete graphics card launches in 2021 also failed to dazzle thanks to a mixture of sky-high prices (even at MSRP) and rock-bottom availability—so much so that Brad nominated AMD’s latest APU this time around. Why pay well north of $330 for 1080p gaming when you’ve got cheaper, more flexible options? A Ryzen 5 5600G offers performance similar to last-gen console gaming, while still leaving the door wide open for an upgrade to a discrete graphics card when prices and availability return to normal. And because it’s local gaming, rather than streaming from the cloud, you can play games of all genres, including those requiring fast responses. Cloud gaming can offer higher performance, but latency limits its appeal. Besides, it’s not an binary choice—you can get an APU and then supplement it with a service like GeForce Now.

Unlike with processors and graphics cards, 2021 had plenty of worthwhile case launches. (And good thing too, because it at least allowed some people to scratch the PC building itch by rehoming their existing system in fresh digs.) Everyone got something to love, whether you stan full ATX towers or dainty mini-ITX enclosures.

Our pick this year is influenced somewhat by abysmal state of the market, but even in normal times, a case that makes an expensive aesthetic affordable would still stand out. The Montech X3 Mesh includes six RGB fans (a mix of three 140mm and three 120mm) and costs just $70. These days, many builders want to buy the best gear possible and still have fancy lighting, and the X3 Mesh doesn’t require them choose between the two. Nor does it sacrifice airflow for looks or downgrade important details. Heck, the tempered glass panel is hinged.

The term “accessory” got a little squishy for this round of awards. Not only did our nominations include an RGB fan, but the winner came from a standard PC building component category: storage.

Yes, usually storage is integral to a build—but the Corsair MP600 Pro XT takes the standard SSD experience and supercharges it. The MP600 Pro XT isn’t just one of the fastest PCIe 4.0 drives on the market right now. It’s also compatible with custom liquid cooling setups. The accessory here isn’t the drive itself, but the face-melting speeds and ridiculously luxe vibe. What you’re adding on to your PC is unapologetically high-end performance.

When Apple admits publicly that its M1 Max MacBook Pro can’t best a competing laptop, you know that rival model brings the best hardware to the table. The MSI GE76 Raider doesn’t stint on firepower: Inside you’ll find an 8-core Intel 11th-gen Core i9-11980HK Tiger Lake H processor, an Nvidia GeForce RTX 3080 GPU with a 165W TGP rating, and a liquid smooth 360Hz display. Oh, and it includes a hefty dose of RGB lighting too, of course. You won’t make compromises with this gaming laptop.

Not in terms of performance, at least. Even its relatively hefty size of 6.6 pounds is understandable given all that’s packed inside. In a year where most PC gamers have had to suffer through shortages and scalpers, getting your money’s worth is a welcome experience. Plus, it’s not like many of us are getting out of the house all that much more just yet.

Other games may turn your head with gorgeous cars or towering villannesses, but when all’s said and done, dumb fun wins the day. (At least with our crew, it does.) That’s how Chivalry 2 rose to the top in our discussion, because really, how do you beat a massively multiplayer medieval hack-and-slash game that has a dedicated button to yelling? Pressing it doesn’t change anything—you get no boosts or anything of the sort. Nope. You’re just adding extra flavor to the moment as everyone runs around swinging their swords and axes.

Of course, that kind of detail isn’t the only reason we love Chivalry 2. You can add to the wonderful chaos in other ways, too—like using the game’s physics to pull off kills via the environment. We’ve seen gameplay where someone threw a weapon at a light up on a pole to knock it free, and then that light fell and killed someone. As Adam puts it, “It’s a PC-ass PC game.” You can’t do better than that.

You know what’s awesome? Getting close to the same gaming experience of a graphics card commonly going for over $1,500 on the street at a fraction of the up-front cost.

We’re of course talking about the new ultra-premium tier of GeForce Now, Nvidia’s cloud streaming service for gaming. A GeForce Now RTX 3080 subscription works the same as the Free and Priority tiers. You buy a compatible game through Steam, the Epic Game Store, or other PC storefronts, then run it on Nvidia’s servers. The gameplay is then streamed to your PC or other compatible device. The difference with the new RTX 3080 tier is that you get the absolute best-looking experience possible. Crank those graphics settings up, flip on raytracing and DLSS, and don’t look back.

You don’t even have to commit forever, either. Maybe you find that the type of games you play require a little less latency, or the cost of $100 for six months is just a little too steep. Or perhaps your long-held place in EVGA’s queue finally yields fruit. The beauty of this subscription service is that you can simply quit. You won’t have overspent to enjoy upgraded gaming sessions, as you would if you bought any of the physical RTX 3080s that are still only available at more than double the card’s ostensible $700 MSRP.

We imagine that in an alternate universe where supply shortages and shipping logistics aren’t so tangled, everyone’s happily playing all the games in their backlog on the graphics card of their choice, obtained at MSRP or cheaper.

Unfortunately, we live in this universe. In our reality, multiple industries have been scrambling to get enough chips for their products (even children’s toys have this problem), and cargo ships sit at ports for days waiting to be unloaded. With limited product available and demand having skyrocketed, PC building sits in a semi-uncomfortable deadlock. Fewer available components and higher prices overall means a slowing of enthusiasm for the PC—and that’s what we’re all about here at The Full Nerd. Circumstances are what they are, but we can’t wait for the day when we can discuss new budget parts, slug-fests between the biggest tech companies, and the many new builds you all are pumped to share with us.