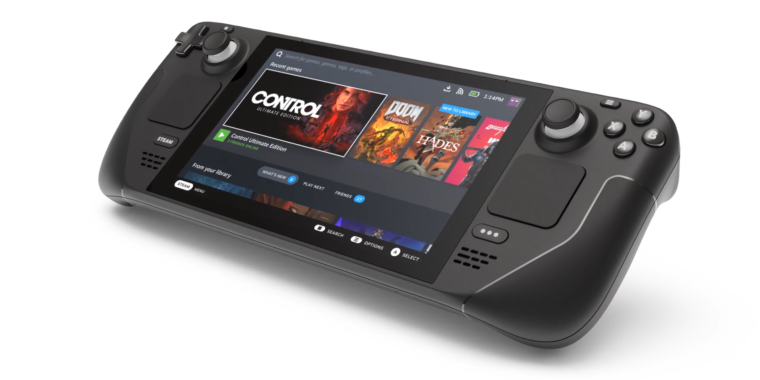 Valve’s portable Steam Deck hardware may be delayed by a couple of months, but that didn’t stop Valve from discussing plenty of interesting details about the system during a wide-ranging developer-focused livestream Friday. That included a lot of nitty-gritty talk about hardware specs and software interpolation, but also design decisions surrounding how to balance hardware-power and battery-power concerns.
AMD’s custom-built Steam Deck APU, dubbed Aerith after the Final Fantasy VII character, is the core of the system and was a focus of the presentation. AMD said the system is the company’s first mobile chip to feature an RDNA2 GPU architecture, so it should have full support for DirectX 12 and the latest Vulkan APIs. That also means that not only will Steam Deck be compatible with the entire Steam library, but many Steam games will already be optimized for the specific chip configuration found inside, Valve said.

While most Steam games these days get by with just 8 or 12GB of RAM, Valve said it chose to put 16GB of LPDDR5 RAM in the Steam Deck because “we want to make sure that Steam Deck is not just compatible with games today but can also run games that haven’t even come out yet.” A minimum of 1GB of that RAM is dedicated to the GPU, but Steam Deck’s unified architecture means that the GPU can access up to 8GB based on what’s happening in the game or even go past that limit “on a game-to-game basis.” The RAM’s 128-bit wide bus also allows for 88Gbps of total memory bandwidth, which Valve said outclasses some desktop GPUs.

As far as storage is concerned, Valve said its tests showed little difference in real-world load time between the eMMC drives (on low-end Steam Deck models), NVMe SSDs (on higher-end models), and the built-in SD card reader. Despite vastly different bandwidth speeds for each option, boot times differed by 25 percent or less between them in Valve’s early testing (though the company said that testing is currently far from comprehensive).

Valve spent a lot of time talking about how the Steam Deck was optimized for battery life, specifically designed to fit in a tiny power envelope in the 4-15 W range. The LPDDR5 RAM also comes in handy there, with no shortage of power-saving features that come into play in low-stress scenarios like 2D games and idle/sleep modes. That means a suspended Steam Deck should last “hours or even days” without needing to be plugged in, Valve said.

When it is plugged in through USB-C, though, the Deck can draw 45 W of power, enough to charge at its full rate and power a game at the same time. The Steam Deck can also provide 7.5 W of power to plugged-in peripherals, enough to power webcams, wired controllers, or external storage devices. For wireless accessories, Bluetooth 5.0 means Steam Deck can support wireless headphones and “several controllers” at the same time. It can also switch to Bluetooth Low Energy mode for less-intensive use cases.

Valve said it wanted to make sure its APU delivered consistent performance rather than relying on “turbo boost” or other modes that can temporarily up the hardware power (and power draw) on laptops and phones. A game on Steam Deck should perform identically in the first ten seconds and after hours of continuous use, Valve said, and game performance on Steam Deck should be consistent whether plugged in, on battery, docked, charging, or downloading games. Even moderately elevated ambient temperatures shouldn’t hurt performance, Valve said, though if things get too hot outside, the system can throttle battery charging rates, download speeds, and even SSD speeds to keep the GPU running as steadily as possible.

Since the APU doesn’t have any hard limits for its power draw, Valve said games running on Steam Deck should impose a frames-per-second limit of 60 fps (to match the display) or 30 fps (for games that push the GPU) in order to maintain battery life. That frame-rate limit also helps contribute to the Steam Deck’s battery life on many games, AMD said. If a game renders a frame faster than the 16.66 milliseconds needed for the 60 fps frame rate, the APU will instantly switch to a very low-power mode until the frame is displayed, then switch back to full power to calculate the next frame.

Valve said that it’s working on a global fps limiter to enforce the 30/60 fps guidelines across all games running on the Steam Deck. Developers will have access to “extra knobs” to help tune the balance between performance and battery life as well.